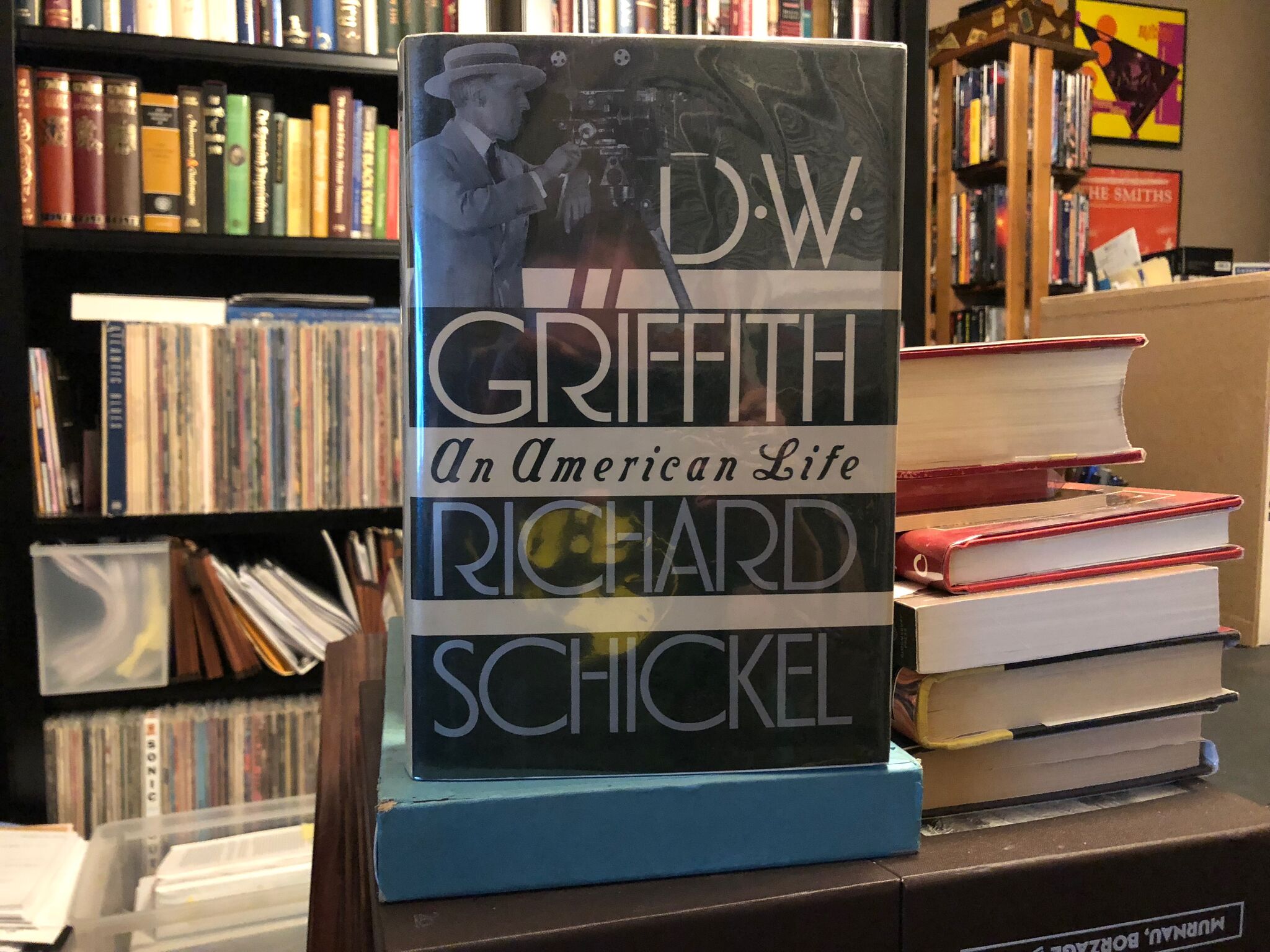 Richard Schickel (1933-2017) was a pillar of the community of film critics who rose to dominance in the later half of the 1960’s–he was film critic for Time Magazine from 1965-2010.  This is the generation for whom films like Bonnie and Clyde were iconic, the generation that presided over the advent of R rated films and the dismantling of Old Hollywood.  Gene Siskel and Roger Ebert were in this generation (Siskel appearing in the newspaper from 1969 and Ebert from 1967.)  A couple of Schickel’s books are cornerstones of the Dalenberg Library’s film curriculum, including The Disney Version and this 1984 D. W. Griffith biography.  The Dalenberg Library copy is the hardcover First Edition from Simon and Schuster.

D. W. Griffith’s legacy is forever tarnished by a Victorian racism that was even controversial during his own lifetime.  There are those who will never forgive Griffith after seeing his glorification of the Ku Klux Klan in The Birth of a Nation.  To be sure, it is the old Klan of the Reconstruction Era and not the modern rebirth of the Klan characterized by the likes of David Duke, but don’t expect modern viewers to be up on all that history.  Most people these days would rather forget that The Birth of a Nation was a defining moment in the development of feature films, and that even today it is one of the biggest money-makers of all time (in inflation-adjusted dollars.)  Schickel makes a solid case that Griffith wasn’t so much motivated by racism as other priorities.  It seems that Griffith’s problem was that he had one foot in the past, even while transforming an entire industry with his other foot in the future.

For a film critic, Schickel spends very little time in the book actually reviewing the movies.  This is real biography, placing Griffith in historical context, and parsing out what made him great and what ultimately caused him to be shunned by Hollywood and nearly forgotten.  (Griffith’s last film was 1931 and he lived until 1948).

D. W. Griffith is arguably the most important director in film history.  While there have been many great directors, nobody has presided over such a revolution in film-making techniques or so dominated the industry (albeit for only a few years) as Griffith.  The Dalenberg Library series “100 Years, 100 Films” is presenting no fewer than 8 Griffith films, and this is simply because the Griffith entries were far and away the best or most important thing to screen in several of those years.

Griffith made about 500 films from 1908-1931.  Sadly, there is no definitive Griffith edition that is available to the general public on DVD or Blu-Ray.  Many of the films could use some restoration, even if you can find them to watch.  Kino Video has a couple of nice boxed sets.  Several more are available on Youtube.  Here are the films chosen for “100 Years, 100 Films”: