We here at the Dalenberg Library are all about literary pilgrimages. I’ve personally been to Edgar Poe’s grave in Baltimore, which is in a slightly creepy city churchyard with actual crypts, where Poe is buried with his female relatives alongside a bunch of War of 1812 veterans.I’ve visited the Bahia Mar Marina in Fort Lauderdale where John MacDonald’s fictional sleuth and “salvage expert” Travis McGee moored his fictional houseboat, The Busted Flush.  I’ve traveled to Mission San Juan Bautista for no other reason than that’s where Carlotta Valdes (as played by Kim Novak) plunged to her death (twice) from the bell tower in Alfred Hitchcock’s film Vertigo, which was based on a novel by Pierre Boileau & Thomas Narcejac, who revolutionized suspense stories by adding psychology to the mix (see my review in this blog some months ago of Eyes Without a Face.)

Now, freshly returned to the Plains from the San Francisco area, I’ll share three more literary pilgrimages.  Snapped some photos.  Here they are: 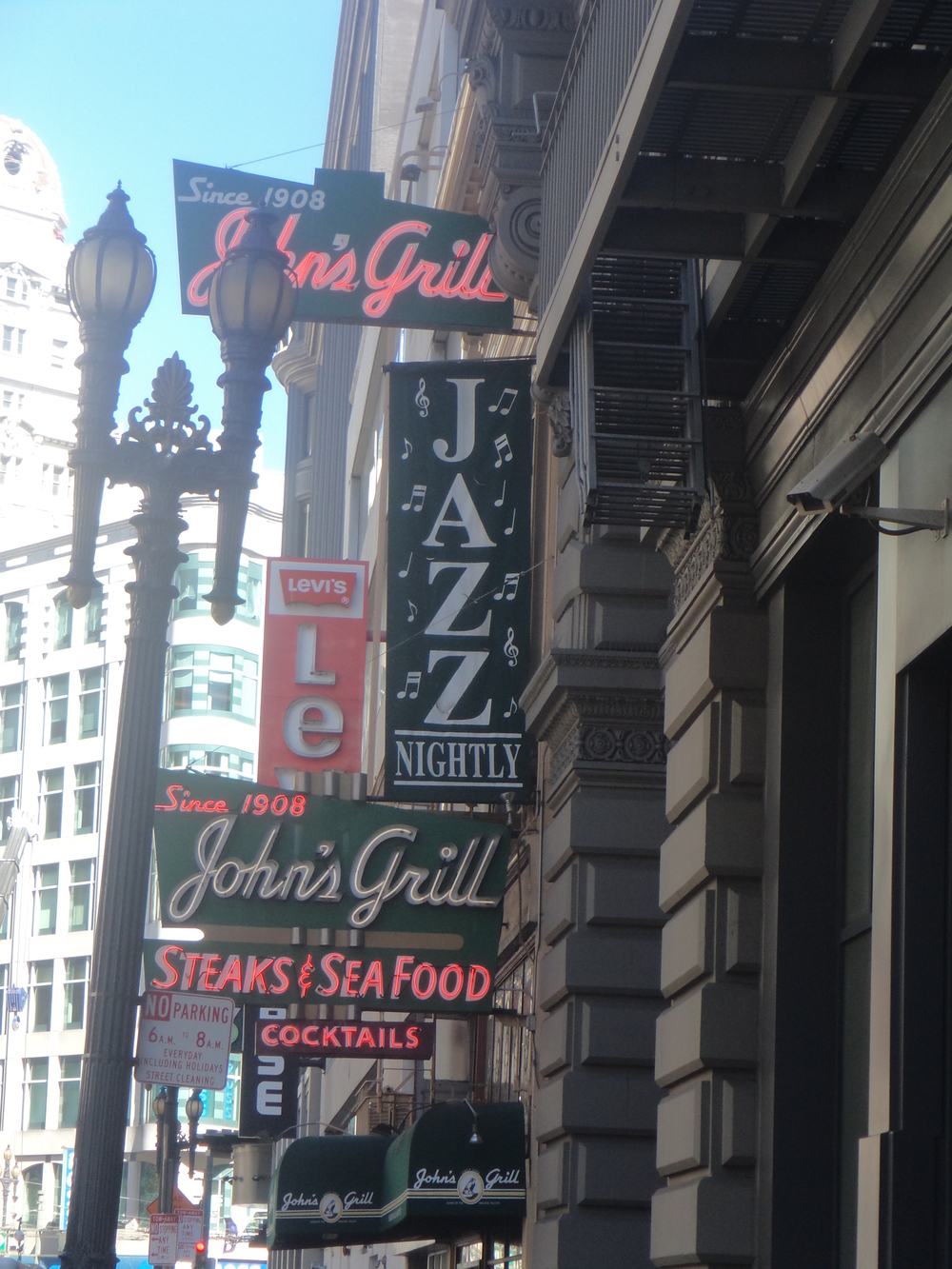 It is still possible to do a walking tour of Dashiell Hammett’s 1930 novel The Maltese Falcon.  The places and addresses in downtown San Francisco really haven’t changed all that much.  You can see the corner where Sam Spade’s partner was killed in the novel.  And highlight of any such tour is a visit to John’s Grill, which has celebrated over a century in existence.  Hammett’s detective Sam Spade stops to eat there in the novel, chops and sliced tomatoes and whatnot, and you can still order the meal at John’s Grill.  The Dalenberg Library copy of The Maltese Falcon is in a Library of America compilation of his works, which isn’t all that exciting to show here, but we do have a collection of vintage Dell mapbacks, which is a lot more interesting to show off on the antique popular literature blog.  This is Dell #411 from 1950, which includes the only three other Sam Spade stories that Hammett wrote, plus a couple other miscellaneous short stories. 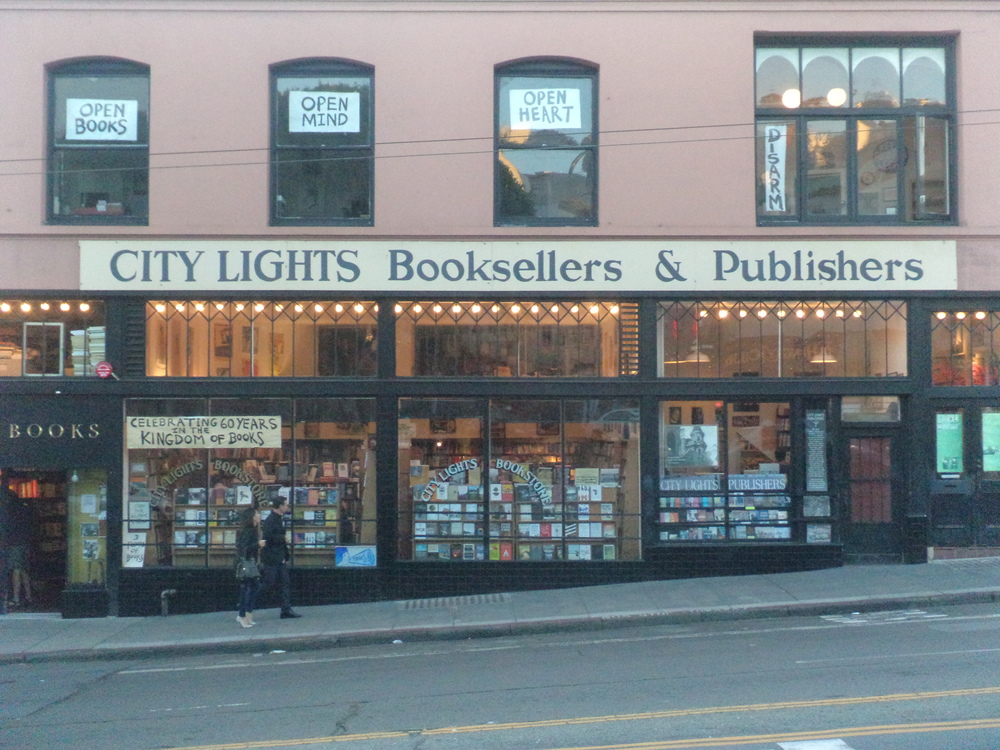 North Beach is easily one of my favorite spots in San Francisco.  It is an eclectic mix of literature, Italian restaurants, imposing churches, and strip clubs, with the booming edges of Chinatown trying to edge its way in.  City Lights Bookstore, in North Beach, remains to this day a bastion to the Beat Poets, still owned and operated by one of the greatest of them, Lawrence Ferlinghetti.  I discovered Ferlinghetti while doing a poetry project in high school, and I have returned to him again and again since.  He is not a great literary poet, but I truly don’t think he pretends to be.  He is a very humorous poet, and he can be a biting satirical poet at the same time.  His views are very liberal, coming from what would have been considered a counterculture sensibility at one time in the past.  He ran with the Allen Ginsberg/Jack Kerouac crowd.  He is VERY good for reading out loud.  I particularly enjoy one wall of the bookstore upstairs, which is dedicated to the Beat Poets.  I always buy something off that wall when I am there. Since City Lights is a publisher as well as a bookstore, buying their books right from their store seems as fresh as drinking springwater from the source.

One such book purchased at the source is Pictures of the Gone World by Lawrence Ferlinghetti.  This copy is Number One in City Lights’ Pocket Poets Series.  It is a  Second Edition from 1995 of Ferlinghetti’s 1955 book.  Turn to page 25 for an excerpt:

The world is a beautiful place

to be born into

If you don’t mind some people dying

or maybe only starving

some of the time

which isn’t half so bad

if it isn’t you 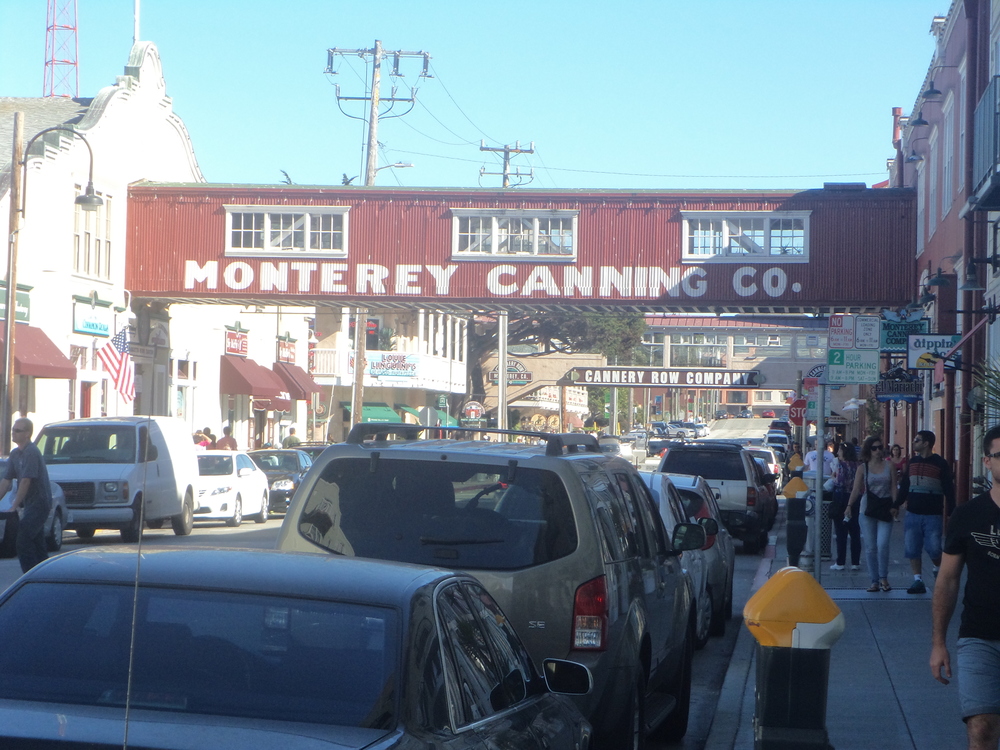 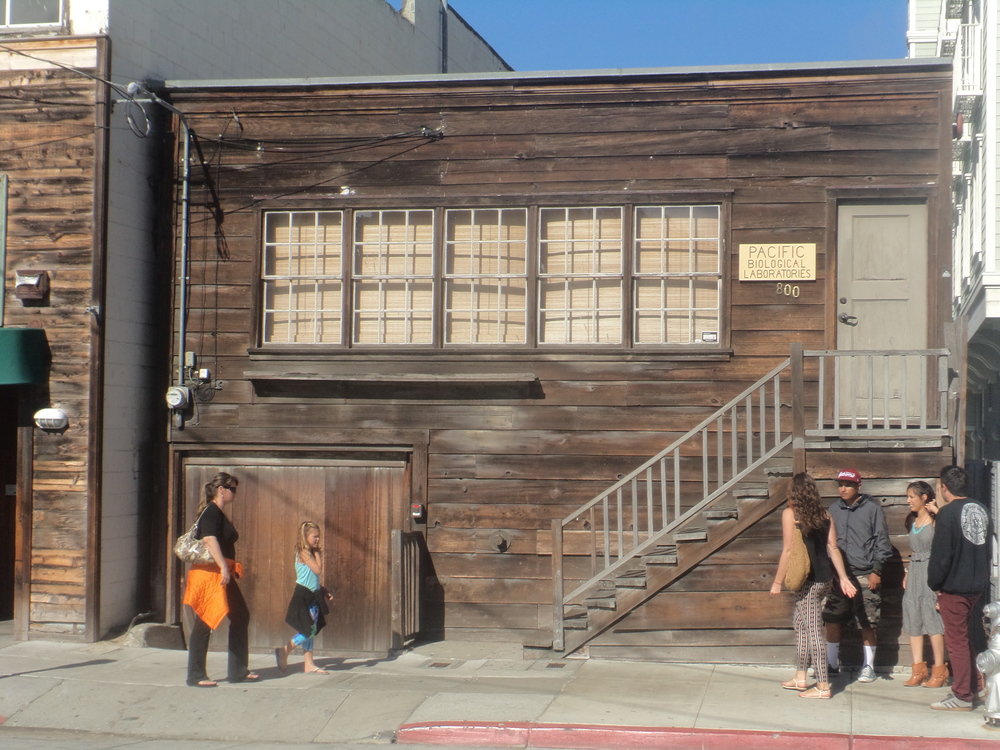 Nowadays, Cannery Row in Monterey is dominated by the famous Aquarium, the memory of John Steinbeck, a row of tourist shops, and of course, beautiful views of Monterey Bay.  Every now and then you can get an evocation of older, wilder times.  I’ve dined by the Bay and watched real wild sea otters playing on the rocks below my window. They seemed oblivious to all the salt water taffy and Made in China objects being sold on the street above.

Steinbeck’s novella Cannery Row from 1945 sketches a time before tourism. Doc’s Western Biological laboratory was a real place, and Doc was a real person.  The building still stands.  The story is full of poetic descriptions, but just the first paragraph give you a hint:

Cannery Row in Monterey in California is a poem, a stink, a grating noise, a quality of light, a tone, a habit, a nostalgia, a dream.  Cannery Row is the gathered and scattered, tin and iron and rust and splintered wood, chipped pavement and weedy lots and junk heaps, sardine canneries of corrugated iron, honky tonks, restaurants, and whore houses, and little crowded groceries, and laboratories and flophouses.  Its inhabitants are, as the man once said, “whores, pimps, gamblers, and sons of bitches,” by which he meant Everybody.  Had the man looked through another peephole he might have said, “Saints and angels and martyrs and holy men,” and he would have meant the same thing.

The Dalenberg Library copy of Cannery Row is in the 1963 edition of The Short Novels of John Steinbeck (originally published in 1953 by The Viking Press.)  New theatrical adaptations of Of Mice and Men show up every now and then.  Back when kids used to be encouraged to read literature in school, before they dumbed everything down with standardized tests and “No Child Left Behind,” Steinbeck’s The Pearl and The Red Pony was on the reading lists in junior high or high schools.  Now you get to read them for fun. Do people still do that? 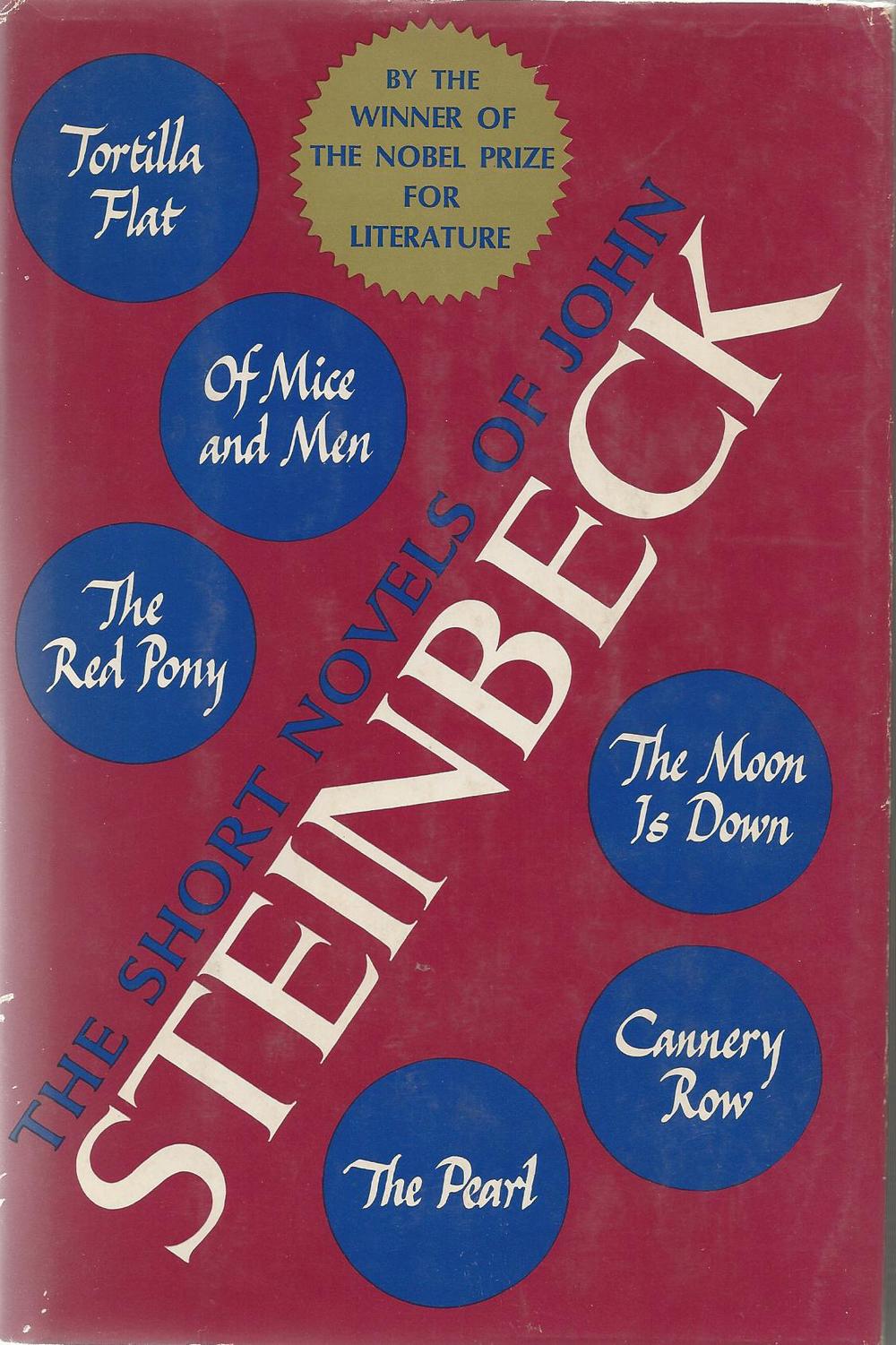